Home / Celebrity / Fergie Plastic Surgery Before and After Photos Revealed

Fergie Plastic Surgery Before and After Photos Revealed

Beautiful, famous singer, Fergie of the Black Eyed Peas, is known for her healthy lifestyle, so plastic surgery came as a surprise when it was first revealed.

Fergie denied having any cosmetic procedures, but when her before and after photos are compared, it becomes pretty obvious that a skillful plastic surgeon intervened.

While many celebrities get addicted to plastic surgery and don’t know when to stop, that’s not the case with the Black Eyed Peas (BEP) lead singer. Fergie changed few things to improve her appearance and then she stopped. Now she looks better than ever, with renewed youth in her appearance. In short, Fergie looks as beautiful and amazing as ever.

Fergie in 2017 looking better than ever.

Fergie was born Stacy Ferguson on March 27, 1975 in Hacienda Heights, California. Her career started at an early age, when she appeared in commercials and also on the cast of Kids Incorporated in 1984. Stacy was a member of an all girl group, Wild Orchid, in the 90’s. There were no noticeable Fergie surgeries at that time.

Her real breakthrough was when she changed her stage name to Fergie, and joined famous band the Black Eyed Peas with which she achieved worldwide fame. Their album “Elephunk” from 2003 became a huge hit with songs “Where Is the Love” and “Hey Mama”.

Fergie released a debut solo album in 2006, called “The Duchess” and it was big hit too. She continued with Black Eyed Peas releasing the album Beginning in 2010. Fergie then released singles, L.A. Love (2014) and Life Goes On (2016). Her album Double Dutchess, is out in 2017. Fergie co-hosted Dick Clark’s New Years Eve 2017 show.

She is married for actor Josh Duhamel (2009) with whom she has a son (Axl). Stacy Ferguson changed her name in 2013 to Fergie Duhamel. Rumors are that Fergie went under the knife for the surgeries listed below.

In 2004 Fergie decided to change her appearance, and all of that might have gone unnoticed if her fans did not see that Fergie nose shape changed along the way.

Fergie nose now looks thinner with a new redefined tip, but on the photos where she was younger her nose shape was round and a little bit bigger. Fergie did not want to admit anything, but her face photos are more telling than her. She’s definitely had some change to her nose profile and as everybody knows, no amount of diet can change a shape of a nose.

In addition to a Fergie nose job, we notice a few more operations on Fergie face. Next on the list are Fergie lip fillers or lip injections. Fergie lips suddenly looked fuller and bigger, sparking these rumors. But not only have her lips changed, but Fergie cheeks look different, too. 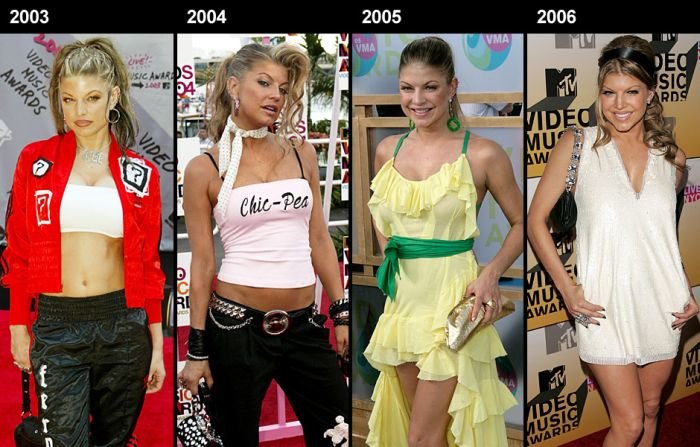 Fergie now has fuller and rounder cheeks, suggesting that Fergie had cheek implants. As with the nose job, Fergie does not want to admit anything, leaving her fans only to speculate and spread the rumors.

The only way for someone to have perfectly round and shaped breasts, like Fergie has, is with breast augmentation from a plastic surgeon. Her perfectly round shaped fake boobs had been a subject of speculation for a long time, since the lead singer of Black Eyed Peas does not want to admit she has fake boobs. Fergie lost a serious amount of weight due to massive exercise and a healthy diet, and in order to regain her bust cleavage again she called her plastic surgeon again. Fergie boob size has increased in size significantly from before. You can see that Fergie bra size has gone from 36A to 36DD.

Let’s take a look at Fergie’s appearance over the years. Put on your detective hat and see if you can spot the signs of plastic surgery changes in the photos.

In 1998, we can see that Fergie nose shape is rather wide.

In 2010, you can see that her nose shape is thinner than before. This is a telling sign of a Fergie nose job.

In 2017, Fergie face shows a fresh skin complexion. This could be from a recent Fergie face peel. The fine wrinkles around her eyes have disappeared. That may be from a Fergie laser resurfacing treatment or Fergie botox. While makeup could be responsible for her facial skin and wrinkle care, it seems to be a little beyond what is possible with makeup alone.

Fergie plastic surgery procedures have come in addition to her normal routine of a healthy diet and regular exercise. With it, Fergie has become even more beautiful and good-looking than before.

Even though she might reached out for a plastic surgery operation, the fact is that Fergie has very healthy lifestyle and that helps a lot to preserve her good looks, making her one of the most beautiful stars on the music scene in all the world. And if her goal was to look amazing in her forties, she most certainly achieved it.

As shown in the images above, we think she looks amazing and we love the results of Fergie’s surgeries.
What do you think? Do you like Fergie looks? Let us know in the comments below.